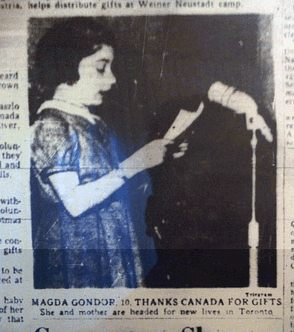 Magda was born in Nyiregyhaza, in post-war Hungary. Both of her parents were survivors of the Holocaust.

In 1956, the Hungarian Revolution took place, and in the chaos that ensued, the borders between Hungary and Austria were not being guarded as closely as usual. Many Hungarians decided to take advantage of this opportunity and to flee Communism for a life of freedom. Magda's mother, Marianne ("Medy"), decided to take the two children with her and leave. Magda's father, Erno, was at work out of town, and the plan was for him to follow them later. Little did the family know that by the time that Erno would be able to make his way back to Budapest, the borders would be firmly closed.

Marianne took the children across a perilous crossing into Austria. Magda had a cold, and could not stop herself from coughing. Miraculously, the border guards either did not hear her or decided not to hear her, and did not shoot at them, and the family passed through the border safely. The group arrived in Austria. At the refugee camp in Austria, Magda was chosen by the Canadian Government to give a short speech thanking the people of Canada for their hospitality to the Hungarian "Freedom Fighters." The speech, complete with a photo of Magda, was covered in the Toronto Telegram newspaper.

After a passage across the ocean on the S. S. Berlin, they arrived at Halifax's Pier 21, and took a train ride to Toronto. Marianne, who used to have a prestigious job at Budapest's Atomic Laboratory, took a job washing floors at Toronto's Mount Sinai Hospital. The family lived in a series of rooming houses and tiny apartments in downtown Toronto, including the Kensington Market area. Finally, the family settled down in the Lawrence Heights Community Housing development, and as tough as that neighbourhood was, Magda viewed it as being a step up from the type of accommodations that she had been living in previously.

At the age of 16, Magda met and married Jack, a survivor of Auschwitz and Buchenwald. Jack came to Canada in 1951 and had been a refugee himself. Magda dropped out of high school and they had one child together, Joseph. Magda eventually went back to school as a mature student, first to complete her high school diploma, and then earned a Bachelors degree specializing in Canadian History at York University. She often took her son Joseph with her class. Magda never forgot her immigrant roots, and early on, became a volunteer for a variety of social causes. An early volunteer position was at the Mount Sinai Hospital, the same place that had given her mother her first job in Canada.

In 1978, inspired by a speech in support of Israel given by John Roberts, a cabinet minister in the government of Pierre Trudeau, Magda joined the Liberal party, and became a key supporter of his over many years. She was also the volunteer office manager for Joe Volpe in his first campaign for political office back in 1981. Magda was elected a Vice President of Toronto and District Liberals, and over two years, chaired riding association meetings for eight different ridings in the Toronto Area.

It was in her position as Toronto and District Liberals Vice President that Magda first met Aideen Nicholson, a Member of Parliament for one of the ridings with the most immigrants in Toronto. After first being a volunteer for Aideen, Magda eventually became the manager of her constituency office. Through working for Aideen, Magda was able to help thousands of constituents negotiate their way through all three levels of government. After Aideen retired from politics, Magda realized the Canadian dream, and opened her own business, a travel agency.

Magda has remained active in the community throughout. Over the years, Magda has served as President of the Ontario Women's Liberal Commission, was on the national executive of the Liberal Party of Canada, has been on the Board of Downsview Community Legal Services, the founding Board of the Hungarian-Canadian Chamber of Commerce, was General Secretary of the Hungarian Canadian Business Association, as well as on the Boards of The Hungary Reborn Festival of the Arts, and the Toronto Philharmonic Orchestra. She also served as Toronto Coordinator of the Salvation Army's Red Shield Appeal. Magda also co-chaired a series of highly popular speaking engagements in honour of successful Liberal party leadership candidate Paul Martin. Eight of these events were hosted at the St. Elizabeth of Hungary Roman Catholic Church, where she is actively involved in other cross-cultural and ecumenical pursuits given her strong commitment to her Jewish faith. She is a former Executive Vice President of the York Centre Provincial Liberal Riding Association, and is the immediate past President of the York Centre Provincial Liberal Association.

Magda has lived in York Centre for most of her adult life, and has raised her family in the riding. Her immediate family still lives in the riding as well. Her son lives a short walk away from her house.

After having been elected to a slew of volunteer positions, Magda made her first attempts at public office in 2006 and 2010, when she ran spirited campaigns for Toronto Council in York Centre, Ward 10. Magda was pleased to have the opportunity to advocate for important local issues and has always been a proud torch-bearer of Liberal values.